My favorite building in Charlotte

My favorite building in Charlotte isn't in the skyline photos. It's the Rosewood condominium complex at Providence and Sharon Amity. I like it because it reminds me of classic French chateaux, rather than trying to express the conceit of making the world anew. But the big reason I like it is I know the architect. Curtis and Liz started coming to our Sunday school class some months ago. When they hosted a gathering at their house, I was fascinated by Curtis’ drafting desk in the living room. He had some photos of Rosewood, and told us where to find it.

Some months later, I was driving up Providence and stopped to take a quick look around and take a few pictures (hoping I didn’t look like a burglary suspect casing the joint). It amazes me thinking of this lovely eight story building coming out of the imagination and planning of my buddy Curtis. 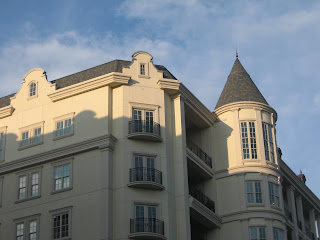 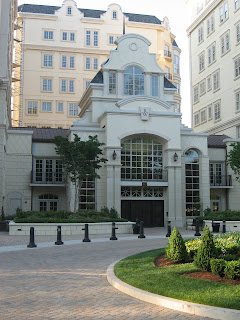 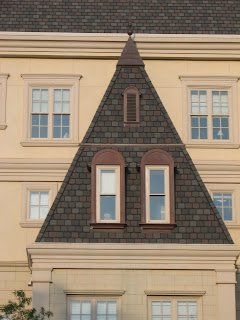 I’m reminded of Jesus’ words in John 14:2. “I am going there to prepare a place for you”. The time will come when we’ll see some very special architecture, in a house that will be ours, and we’ll all know the architect. His genius in design we can already appreciate (galaxies, planets, landscapes, many other things). We’ll have many new reasons to appreciate it that day, I’m sure.

The Rosewood Condominium site
Posted by Unknown at June 28, 2010 No comments:

The promise of the New Covenant

This is how the "faith and circumstances" theme started. In 2005 I was pondering Jeremiah's promise of the New Covenant. "This is the covenant I will make with the house of Israel
after that time," declares the LORD.
"I will put my law in their minds
and write it on their hearts.
I will be their God,
and they will be my people.

No longer will a man teach his neighbor,
or a man his brother, saying, 'Know the LORD,'
because they will all know me,
from the least of them to the greatest,"
declares the LORD.
"For I will forgive their wickedness
and will remember their sins no more." Jeremiah 31:33,34

I found this promise hard to believe. If this New Covenant promise really worked, I thought, our churches would be a lot different. Our churches have many people teaching us to know the Lord, teaching us what the Gospel really means if we truly understood it. The promise seems to say that shouldn't be needed.

Then a picture came to my mind. Moses called the people to go forward into the Promised Land, and everyone except Joshua and Caleb didn't dare go. (Numbers 13 and 14). God had promised to give them the land, but the people didn't believe the promises because the land had enemies living in it. I don't find in Numbers anyone saying "If God had really given us this land, the enemies wouldn't be there anymore", but I bet people thought that. I know I would have. But God didn't drive the enemies out ahead of time because He wanted to show the people they could believe in the promise before it was fulfilled.

So I realized Jeremiah's promise of the Law written on my heart was a promise I could claim and believe in, even when I still saw my heart full of enemies of God's law. I could believe in the promise even while the enemies still lived in the Promised Land. So I began to do that, and my spiritual life began to change.

I still have many enemies of God's law living in my heart. But there are fewer enemies than there used to be. And the promise is nonetheless true.
Posted by Unknown at June 27, 2010 No comments:

But I wonder if that formula, while very good, isn't itself somewhat over simplified.
A prophetic passage I have pondered from time to time is Isaiah 7:14. "The virgin will be with child and will give birth to a son, and will call him Immanuel."

There are two statements here. First, the virgin will have a child. Second, that she will name him Immanuel. The first statement is fulfilled quite literally. Mary concieved a son while she was still a virgin. The second statement wasn't fulfilled literally. She and Joseph named their son Jesus, not Immanuel, because the angel told them to do so. We do use the name Immanuel to refer to Jesus, but that usage isn't found anywhere in the New Testament.

What in the text tells us that the first statement is literal and the second not so literal? I'm not aware of anything. I suspect we only know how to interpret those two statements because we know how they were fulfilled.
Posted by Unknown at June 17, 2010 No comments:

The fang and the thorn

A dog up the street frightens me. Thankfully, most of the time she is inside. But I have often wondered, walking past that house. She has barked and bared her fangs when I walked past, then she would slink along behind me after I passed showing her fangs when we looked back at her.

One evening my wife and I walked past the house, relieved that the dogs were not in sight. Another neighbor coming toward us, gave words to our sense of relief. “How nice to walk dog-free.”

Tales of animal attacks are big on cable TV. Shark attacks, crocodile attacks, bear attacks, and others. The victim shows his or her scars and retells the story of near death at the fangs of a creature “seeking what it might devour.”
Scripture does have a bear attack story (2 Kings 2:24) and Matthew 7:6 ends with the image of savage dogs or pigs tearing people to pieces.

But Scripture seems more concerned with the thorn than the fang. The curse on Adam was that the ground would bring forth thorns and thistles instead of food. God warns the Israelites that the other nations in the land will be thorns in their sides (Numbers 33:55, Joshua 23:13, Judges 2:3). Laziness leads to thorns in your vineyard (Proverbs 24:31). Isaiah uses thorns as a symbol of a land under judgment abandoned by its people (Isa 5:6, 34:13). Jesus says the cares of this world are thorns crowding out the seedlings of the Word. Paul describes his great trial or affliction as a thorn in the flesh (amplifying the image used by God for the enemy nations).

Yet isn’t the fang more frightening? I’ve never worried about any of our neighbor’s plants, nor have I ever wondered if the neighbors might be afraid of our rosebushes. So why does Scripture worry about thorns so much? It can be argued that thorns are more dangerous. The curse in Genesis 3 is that our agriculture will not always succeed. We will work to grow food, but food won’t always come. History shows us that thousands, at times millions die in famines, when the vegetable kingdom has not produced for us.

Paul’s image of the thorn in his flesh is dramatic because of its implied avoidability. A literal thorn in your flesh ought to be easy to deal with. Just take it out. Yet the spiritual thorn in the flesh Paul cannot take out. He prays to God three times to take it out, but God chooses not to. Is that not part of the unseen drama?
“God, I know you see how much this hurts. And it is not at all hard for you to pluck it out. Why aren’t you helping me?”
“My grace is sufficient for you for my power is made perfect in weakness. Paul, I could change the circumstances that give you so much pain. But I can also give you peace in the midst of your pain. Which is the greater display of my power?

That dog has been an encouragement to pray. I've thought of David's words: “Even though I walk through the valley of the shadow of death, I will fear no evil, for you are with me.” Now I shouldn't exaggerate; that dog is not the shadow of death. (She isn’t a pit bull). But I could call her house the shadow of punctured skin. And if God is able to sustain in the fear of death, how much more can He sustain in the fear of a flesh wound? So I began to commit my epidermal integrity to God as I walk past.

A couple months ago I thought about Jesus’ words to pray for our enemies. Can I pray for that dog? I don’t believe dogs have souls, but I’m sure they have emotions. What lies behind their aggressive behavior must be a mixture of fear and anger. So I’ve prayed for those emotions to be stilled. While my prayer is driven by the desire not to be bitten, I don’t think this is a purely selfish prayer. If the dog feels less fear and anger, my prayer would increase her happiness as well as my own.
I’ve also included in my prayers the dogs’ owners. I’ve never met them, but I pray now as I pass that house, that they would be abundantly blessed. May their table be so laden with the riches of God’s mercy and love, that even the dog is transformed by the crumbs of blessing that fall from her master’s table.

In the last few weeks I've noticed a difference. I've seen the dog outside a few times, and she hasn't threatened me, she hasn't even barked at me.
Posted by Unknown at June 08, 2010 No comments: